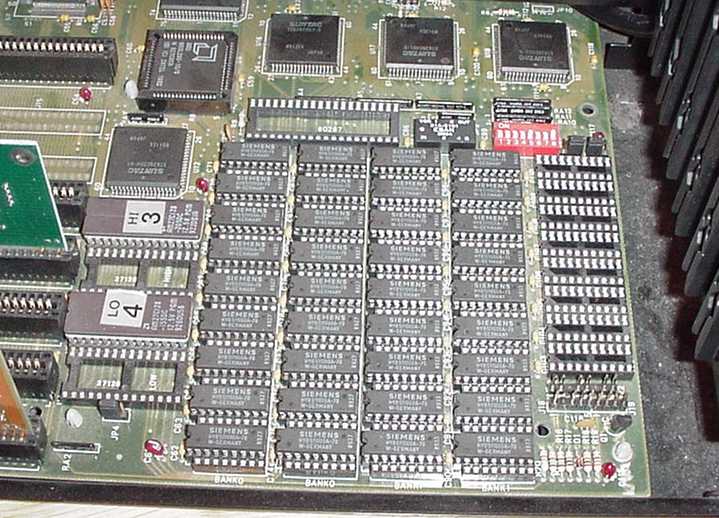 The four rows of black ICs in the bottom right corner are the RAM. This computer has four megabytes. For a 286 that was much. Per row one megabyte is stored in eight chips, every line has an additional parity chip. The rows one and two form the "bank 0", the rows three and four form the "bank 1". Right next to the ram chips are eight empty sockets, which are more stucked together. I don't know if you can plug RAM in these sockets or what they're good for.

Below these sockets are connectors for the reset switch, the speaker etc.
Left of the RAM sockets, you find four bigger BIOS sockets. The sockets 1 and 2 ( counted from top to bottom ) contain the HI-BIOS ( High-BIOS ).You can use both sockets with two 128k chips or the first socket with a 256k chip. In this model, one 256k chip is used. It's the same with the LO-BIOS ( Low-BIOS ) in sockets three and four.
Above the four BIOS sockets you'll find a chip of the mainboard chipset, which was built by the Japanese producer Suntac.
More above is the socket for the processor which is built in a pinless case. At that time the processors didn't need any cooling. Above the RAM socket and right from the processor socket we find the coprocessor socket, which is here ( like in most mainboards with coprocessor-option ) empty, because coprocessors weren't cheap in that days. You were able to add a coprocessor to a 286, a 386, a 386SX, a 486SX and the early 486DX, since the 486DX they're integrated into the CPU. Coprozessors are/were very expensive ans only helped with CAD-Applications or sometime when using a spreadsheet-app. But of course this app must have support for the coprocessor and that wasn't the case very often. The coprocessors usage is to do some maths to free the ressources of the CPU for other things.
So far, I haven't worked out the sense of the black box right next to the coprocessor socket.
Right from the black box are eight so called DIP-switches. With these jumpers you can tell the computer for example what type of BIOS it uses or how much RAM it has.
Above the coprocessor socket, the black box and the DIP-switches are three additional chips of the mainboard chipset. 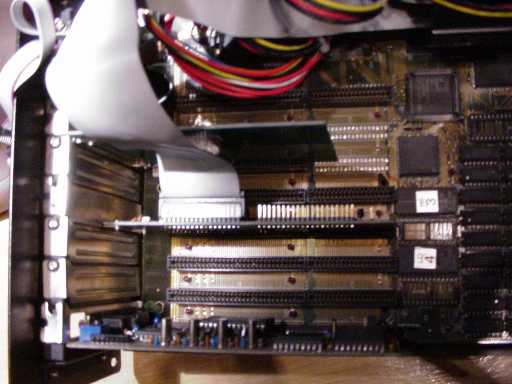 On this picture you can see the eight expansion slots. Here's the lineup from top to the bottom:

Slot 5 contains a MFM/Floppy-Controller made by Western Digital ( 16-bit ).
Slot 6 contains a 3Com EtherLink II 16 TP network card with 10 Mbps, RJ45 jack and Token Ring jack( 16 bit ).
Slot 7 contains a Creative Labs SoundBlaster 16 without Plug'n'Play ( 16 bit ).
Slot 8 contains an Ultimate EGA graphics board. It's capable of dual-monitor usage. It can show two pictures at a time. It also has 256 KB of RAM. Furthermore, it has got a parallel port, which you can use either for a printer or a second monitor ( at least I think so, I never tried ... ). Last but not least, it contains a serial and a light-pen interface ( 8 bit ).

I use two half-height 5.25" 1.2 MB drives in this computer. They're connected to the controller in slot 5.
I haven't yet successed in using a mous under Windows 1.01,but the Logitech DOS driver recognizes both the Inport-card which I had in the computer once and the serial port on the EGA graphics board.
I dug out an old EGA monitor from the dumpyard. It's made by "TECO - Thermo Control", but unfortunately I don't find more info about this manufracturer on the internet ( -> google ).
As the battery is empty I have to access the system with diskettes. I have a NEC-OEM-MS-DOS 3.30 bootdisk as ootdisk and I have Windows 1.01 on disks.
If I plug in a 16-bit VGA card and use a color VGA monitor, Windows 1.01 is only black and white. Thanks to the EGA-system I get Windows 1.01 in color too!

First the BIOS:
That's the bootscreen: 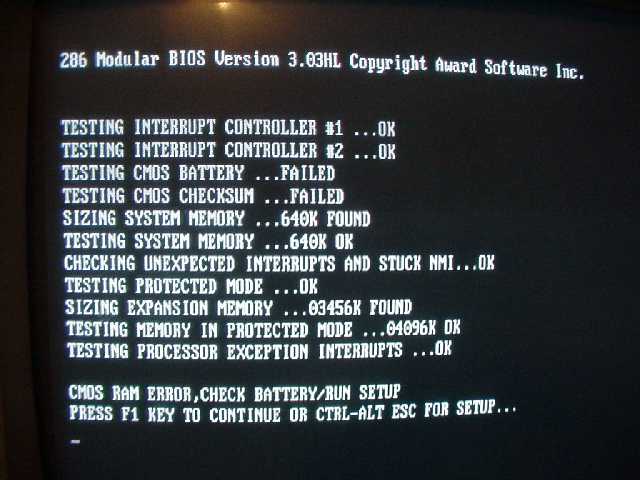 That's the ( even today ) typical POST ( Power On Self Test ). I think the rows are self-explaining.

Then I have to press F1 ( thanks to the empty BIOS-battery ) and the computer starts the Bootstrap Loader. It boots from drive A:\ if the drive contains a bootable disk. That's what the boot screen of DOS looks like: 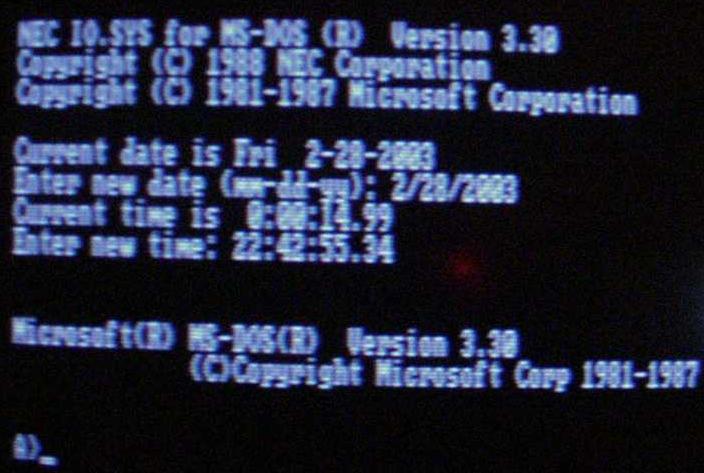 Not really outstanding, is it?

Now comes Windows. I have to remove the bootdisk from drive A:\. Then I insert the "Windows 1.01 Startup Disk". Besides win.com command.com is also on this disk. In drive B:\ is the "Windows 1.01 System Disk". Now, I must type "win" at the A:\-prompt, then Windows boots up. For this process the system disk is also needed, which is inserted in drive B:\. 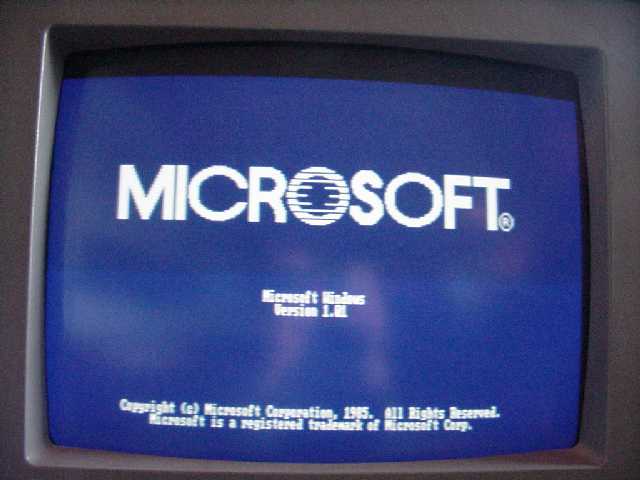 Then the mouse cursor and the green background appear: 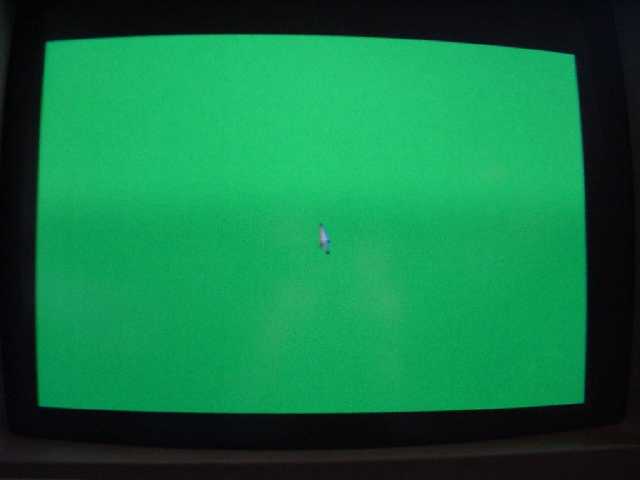 The MS-DOS-Executive is the forefather of the Program-Manager, the File-Manager, the "My Computer"-Window and the Explorer. From here you can execute various MS-DOS-Programme. But you can also execute special Windows 1.0 apps ( which were rare ) from there like for example the included MS Paint, MS Notepad or Control.exe ( the system control ).
Here I wanted to execute edit.com, the DOS-Editor. The following warning will simply be ignored: 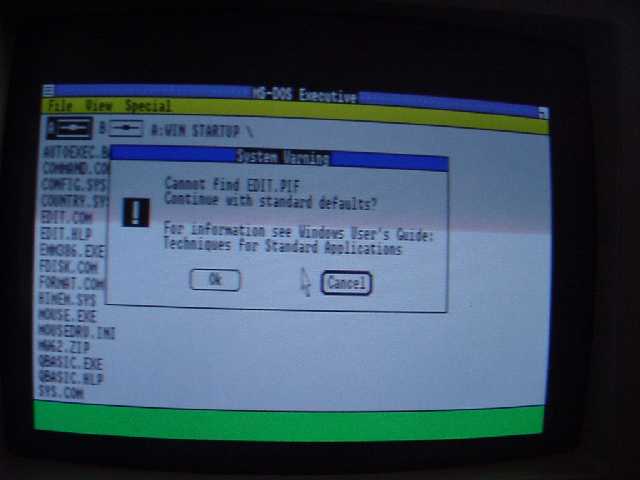 After that an error appears which I had never seen so far in Windows 1.01: 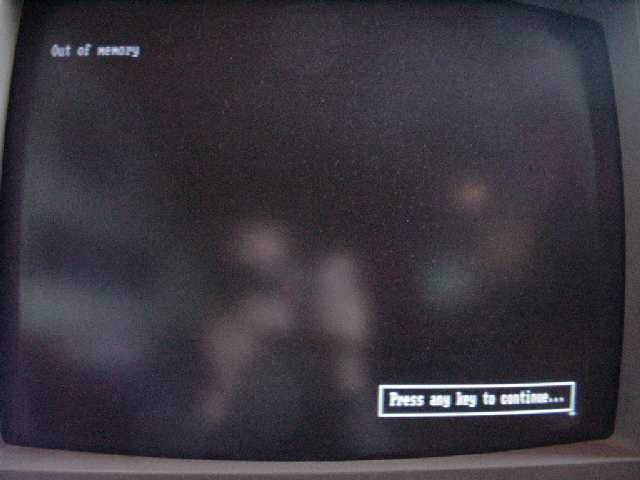 I thought 640 kb should be sufficent for edit?!
Unfortunately Windows 1.01 has neither an EMS- nor an XMS-driver included, so I had to search such a driver. Otherwise, Windows would have 4 MB RAM to use. Unfortunately I wasn't able so far to run SimAnt, Siedler 1, SimFarm or SimCity Classic for DOS on disks.
Another problem: When I copy win.com on the bootdisk, this disk at the next reboot isn't accepted as a bootdisk anymore. Furthermore an autoexec.bat or a config.sys are missing, because it's only a bootdisk.

So I can't install a German keyboard, a EMS-driver, a mouse, a RAM-Disk or similar at the startup.