Uncreative Labs How Tos:
Getting more from your computer

Recording audio with your computer is a fairly simple task that will allow you to not only copy your music to CDs or MP3s, but preserve any recordings you have made. If you have a large collection of records, you can save them on the computer and listen to them as many times as you want without wearing out your record. If you have a reel-to-reel cassette recorder, you can play your tapes as often as you want without the need for a large chunk of your desk space being taken up by the reel-to-reel.

Do not follow this process for copying audio CDs to your hard drive! You will get much better results if you rip (digitally record using a program such as Audiograbber) the CD rather than re-record it.

This guide takes you through the steps of recording audio to a wave file. A wave file is a file type that records the sounds uncompressed as the computer "hears" it. Due to the fact it's uncompressed, a normal wave file of a 3-4 minute song can be bigger than 30 megabytes! At this rate, a 10-song CD can easily take up 300 MB on your hard drive. You can drastically reduce the amount of space needed by converting the wave file to a MPEG (Motion Pictures Experts Group) Layer 3 file or MP3. The MP3 format compresses a wave file by eliminating the parts of a recording the human ear does not hear. A typical MP3 is around 3-5 MB in size, making an album fit in about 30-40 MB of space. While the process of converting a wave file to an MP3 is fairly simple, this how-to will not cover it.

What you need to make a recording

Your sound card probably has three subminiature (small headphone) jacks: Audio out, Line-in, Microphone In. Some cards vary in configuration, but they usually have those three jacks. Many sound cards also have a midi/joystick port, which can be identified by counting the number of holes found on the jack. If it's got 15, it's most-likely a midi/joystick port.

This may sound complicated at first, but it's really not. If you're still wondering what something is after it is explained, feel free to ask at the Uncreative Labs forums, http://forums.uncreativelabs.net.

There are several standard types of audio output jacks:
RCA or Motorola: This is found in most home stereo equipment and VCRs. Left and Right channels are always seperate, and the connector looks like a pin sticking out of the center of a hole.
1/4 inch headphone: This is something found on most stationary audio equipment. It is a bigger version of the headphone connectors used for CD players and Walkmans.
1/8th inch headphone or subminiature: This is found on most CD players and walkmans. Most computer audio input and output is done with this type of connector. If your soundcard is normal, you will need this connector to hook up to your device.
Bare Wire: Some stereo systems have a type of connection where you connect bare wire to it. While this has its advantages, you will have to look for a cable (or make one) designed for this type of system.

Using the proper software on a computer is just as important as using the right tool in the workshop. Just as a hammer can make a screw go in to a hole, Windows Sound Recorder can record audio. However, just like using a screwdriver to screw in the screw, using a good piece of recording software will save you a lot of work and possible failure. I recommend using Audiograbber to record audio in to the computer. You can use other software if you want to, but this how-to covers the process using Audiograbber.

When you connect the cables to the computer, you will most likely want to use the line-in port on your sound card. This is designed for recording audio. (It's normally the middle port if they're not marked.)

When connecting to your device, try using the RCA ports first. This will free up the headphone jack (if your device has it) and allow you to get a better connection. Do not daisy chain devices together more than you need to. The more connections and cable you have, the greater amount of noise your recording will have.

Setting up the recording

Connect the cables to your computer (it's safest to do it with the power off, but I personally have not harmed a computer by doing it with the power on.) However, you should not have any sound playing at this time, as it is possible to damage something (YOU!) by having the sound be too loud. 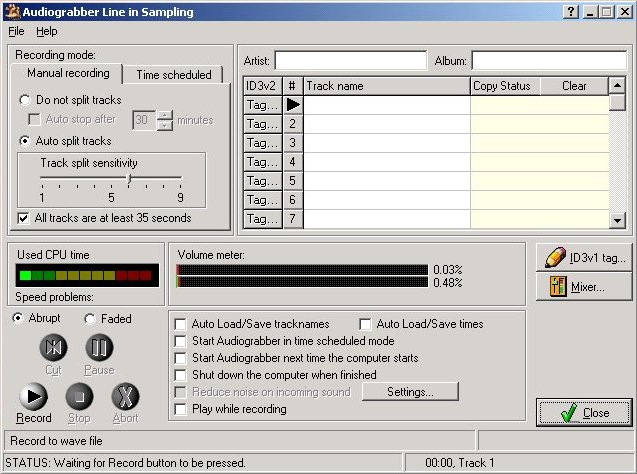 From this point you can verify your setup will work. The volume meter is located near the center of the Audiograbber screen. When you start playing sound, the volume meters should respond to the sound. If they do not, you are not getting sound in somewhere.

First, check your connections. Make sure they're in completely. If that doesn't solve the problem, chances are you're not listening to the correct input. Click the "Mixer" button to the right of the volume meter. If you're using the line-in port, then line-in should be selected. You may also need to adjust the volume before you get much response. If you do not get sound, check your device. There should be sound coming out of it. Sometimes you happen to make the correction between songs.

When you have sound coming in, it's almost time to hit the record button. First, you want to play what you're recording and set the volume so it does not exceed 90%. If you do not want to listen to the whole piece, you can play a short section and set the volume to be between 50% and 60%.

If you have the volume too high, you run in to a problem called "oversaturation" which leads to "clipping." When recording, what you're recording to can only hold so much signal. If you have it too high, it will record as much as it can and clip off the rest. Conversely, if your recording is too quiet you will not be able to hear it and making it louder after it is recorded can be extremely difficult. Remember that the quality of the recording is dependent on the quality of the playing. Don't expect any better than 10% improvement in a recording you edit.

This how-to contains enough information to begin the process of recording audio with your computer. There are many more features that this how-to does not describe. Take the time to explore and consult the help file. If you are familiar with Audiograbber's extra features and want to write a description of them, please contact us. You will recieve proper credit. If you have any questions, please feel free to ask in the forums, http://forums.uncreativelabs.net