Introduction to the Computer 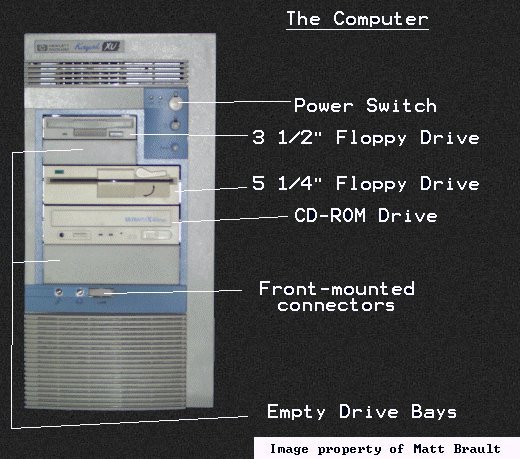 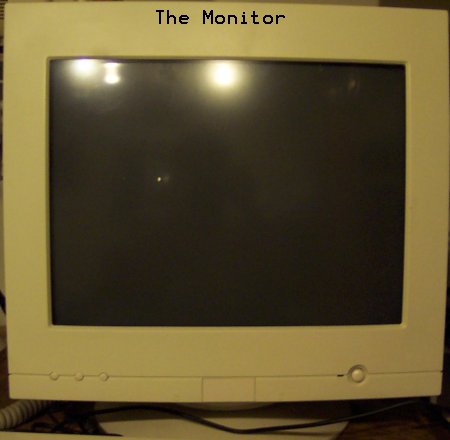 You have a computer now, and someone you know has internet access. But you consider yourself lucky to find the power switch. This guide attempts to teach you the very basics of what a computer is, and also what the computer does. This guide does not go in depth, as it is merely an introduction.

Parts of the Computer

Computer:
This is the central device in the computer. It is responsible for doing the tasks of processing and storage, while accepting input and producing output for other hardware. The computer is the entire device in the first image above.

Monitor:
This is the most common output device of the computer. Sometimes referred to as a CRT (actually referring to the cathode ray tube inside the monitor) or a LCD ( liquid crystal display, common on laptops), this device displays the output of the computer. (It monitors the video connection and displays what is put out, thus the name monitor.)

The keyboard:
This is the most common input device. The keyboard is a set of 83 to 101 keys that input information in to the computer. See picture, above.

System:
This is the Computer, Monitor, Keyboard, Mouse, Printer, speaker... combination. Often, system is used to refer to the computer itself, but it really reflects the entire collection of hardware and software connected in the system.

Power Switch:
Turns the computer on and off. Some computers have two power switches, one is a "hard power off" where power is completely shut off (these, if installed, are on the back of the power supply) the other is a "soft" power switch. Power is still going to the computer, but it is shut off. Many new computers use such power switches. They'll often not turn back on after a power outage or shut off automatically after you execute a shut down command.

Floppy Drives:
These devices store data on floppy disks. (See below.) Floppy drives are the most standard drive in computing today, and are the best supported by different operating systems. However, many PC manufacturers deem the floppy drive as obsolete and no longer include it in new computers. If you have floppys you want a new system to read, you are better off getting a system with a floppy drive already installed, especially a laptop.

Floppy Disks:
This is the media a floppy drive saves on. The name floppy disk refers to the large 8 inch diskettes there were actually floppy, and also to the material inside the disk. Don't confuse a floppy disk with a hard disk, as they are two different things. The smaller floppy in the image below is a 3.5 inch floppy disk, measuring 3 and a half inches from left to right. Many have noticed a 3.5 inch floppy disk isn't very floppy. The name is just a hold-over from the larger disks that were floppy.

CD-ROM Drive:
This drive reads CD-ROM discs. Some drives like this will also write them, and are called CD Writers. (Or different names describing the type of CD it will write. That's beyond the scope of this document, however.) CD-ROM drives are NOT for holding cups, but rather for holding one CD at a time. Some mini-discs are made to fit in an indention in the middle of the drive tray (the part that comes out when you press the eject button.)

I recommend only opening and closing the CD-ROM drive by using the eject button on the front, or PC software to do so. While the drives will close if you push the tray in, there is a chance they may be damaged by doing so. After a CD is removed from the drive, close the drive door so you do not accidently break it. Inside the CD-ROM drive is a potentially eye-damaging laser, so do not hold any part of the drive open when in use. (Opening and closing the drive door will NOT hurt you.)

CD-ROM disc:
This is the media the CD-ROM drive uses. CD-ROM stands for Compact Disc - Read Only Memory. CDs, as they're called for short, are often stored in jewel cases, CD sleeves, or even paper sleeves. Be careful to handle them only be the sides, middle and label. While a CD may not be hurt if handled on the data side (non label side) there is a good chance it could be. 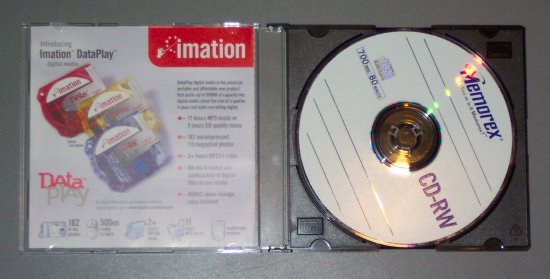 Front Mounted Connectors
Connectors on the front are quickly gaining popularity today. Often, a device needs to be plugged in to something temporarily, and moving the equipment to get to the back is a hassle. To solve this, manufacturers have started mounting connections on the front. The computer shown above has microphone in, headphone out, and a volume control, but different computers have different connectors. I have a system from around 1980 that has a keyboard input on the front.

Empty Drive Bay:
Computer cases have always had room for extra drives to be installed in the case. On the front of the case is often a plastic cover, designed to keep dust and prying fingers out of the case. (Effective for prying fingers, but not so much for dust. ;-)) To a large degree, the covers also make the case look nice. Behind the cover is some method for mounting a drive. Many cases only require a screw to be placed in a location on a drive going through the mounting rails, but others require different solutions.

Hard Drive:
This is the device where most of the information in your computer is stored. Almost all hard drives today are inside the case, but there are a few exceptions. The name hard drive refers to the media inside, the platters in the drive are a hard metal circle (kinda like a CD.) Sometimes hard drives are known as hard disks. There's only really a difference to the most picky.

Mouse:
This wasn't pictured because there's pictures of it in How to Use the Mouse. A mouse is the second most commonly used input device for computers today, second only to the keyboard. An arrow appears on screen and tracks the movements of the mouse. Sometimes the arrow changes, to an hour glass, an I-beam or something totally different. So, this arrow is referred to as a cursor.

Modem:
This device allows your PC to communicate with other PCs, usually over the Internet. A phone line is hooked to the modem, and the modem transfers data over the phone line. Modem is an combination of the words that describe it's function: modulate demodulate.

Network Card:
Many new PCs have network cards included in them. Like a modem, they allow your PC to communicate with other PCs, but aren't used as much just for the Internet. Network cards allow for creation of Local Area Networks and Wide Area Networks. Even the slowest network cards are faster than modems.

CPU:
A Central Processing Unit does the work inside the computer. The CPU executes the instructions in a program, and interacts with the hardware of the computer. Speed, until recently, was measured in Megahertz (mHz for short), but has now moved in to gigahertz (gHz). A gigahertz is 1,000 mHz. The higher the speed rating, the faster your CPU will process. (Note: This is not the only factor in determining how fast your computer is.)

Random Access Memory or RAM:
This is system memory. The operating system starts to load in to the RAM at boot time, and programs constantly use it. With some limits, the more ram you have the faster your system will perform. After upgrading RAM alone, I noticed speed increases in every program I ran. (Note: This too is not the only factor in determining how fast your computer is.)